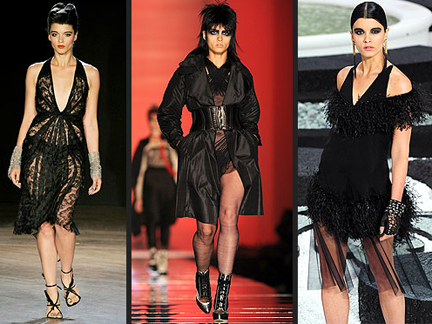 According to the the fashion industry, this model is in the plus sized category. How is she plus-sized? I’m really glad she is no longer battling anorexia, but she still looks un-attainably thin compared to most real women. Um…yeah ok fashion industry….we’ll pretend that you know what real women look like.

“Crystal Renn’s rise to the top of the fashion industry isn’t slowing down. First, the plus size model, who documented her years suffering from anorexia in order to work in the fashion industry in a memoir Hungry in 2009, broke down barriers in New York City, walking in Zac Posen’s ZSpoke show last month. Now, she’s burning up Paris, walking in Zac Posen’s ready to wear show, as well as walking the runway for major labels Jean Paul Gaultier and Chanel. “This has been one of the most amazing times of my life,” Renn, 24, tells PEOPLE on the phone from Paris. “I’ve done one show before, usually as a special guest, but to be working this much is incredible.” For Renn, who walked in Jean Paul Gaultier’s 2006 fashion show at a size 12, being treated as one of the pack, not as “the plus size model,” is “a real breakthrough,” she says. “I’m here being treated like any other girl. It doesn’t matter my size. It doesn’t matter who I am. I’m going on castings like everybody else.” Though Renn is now a slimmer size 10, she says she’s still “different from most of the girls at the castings,” but acknowledges that there is more diversity on the runway these days. “When I first started, the girls were all blonde, all emaciated and miserable looking,” she says. “Now, there’s more ethnic diversity. The girls are not as skinny as before. You do see size 6s and a couple size 8s. There is change happening in the industry. There is more allowance for people to be different. I’m so impressed. I can’t wait for next season.” – Charlotte Triggs

2 thoughts on “Plus Size Model My Ass!!”