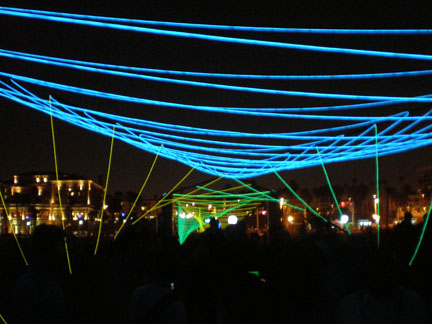 After the art show, we stopped by the Glow Festival in Santa Monica. It was kind of a big let down. I was expecting a much higher production value and quality. There were a lot of exhibits that were not executed very well. Also….it was PACKED!!! I think I was expecting more from the 2008 pictures. Oh well….it was an adventure. The best part was the wedding that was taking place in the super ritzy ocean front hotel that had looked out onto the Glow festival. There were people wearing Christmas lights on their head and light up fur vests stoned out of their minds trying to crash the wedding. I hope the couple received a discount….