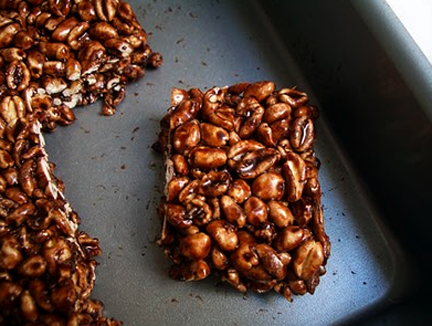 A couple days ago, I had a huge craving for Puffed Wheat Squares. I told JB, “I want to make puffed wheat squares!” and he looked and me like I was crazy said “what are puffed wheat squares?” I was floored….Puffed Wheat Squares are REALLY, REALLY popular in Alberta (where I grew up). I couldn’t believe that Mr. Baker-man (he’s made everything) has never had these yummy chewy treats!! Once I decided to make them….I  had to go to three stores to find plain puffed wheat. Whole Foods finally came through. When did plain old boring puffed wheat become a specialty item? I suggest that everyone try them, they are like Rice Crispy Treats but are chocolate chewy goodness.

Measure out puffed wheat in a heatproof bowl. Lightly grease a 9-inch square baking pan. Set both aside.

Combine butter, corn syrup, brown sugar, cocoa and salt in a small saucepan. Bring to a boil over medium heat. Stir constantly with a wooden spoon for 2 minutes before removing from heat. Add vanilla and stir briefly to combine.

Pour the hot mixture over the puffed wheat and quickly stir to coat evenly. Pour the coated cereal into the greased baking pan and use a damp spoon or hands to press the mixture evenly into the pan.

*Strange but true: In my experience, Puffed Wheat Squares (also called Puffed Wheat Cake) is a distinctly rural Canadian phenomenon. Nearly everyone I meet who is familiar with the square hails from Alberta, Saskatchewan or Manitoba.

(Image and Recipe via The Casual Baker)